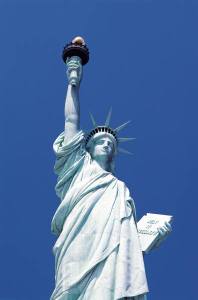 The Statue of Liberty was given to the people of the United States from the people of France in 1886 in recognition of the friendship established during the American Revolution. The Statue of Liberty’s symbolism has grown to include freedom and democracy as well this international friendship. On the tablet held in her left hand is inscribed the date of the American Declaration of Independence, July 4, 1776. The statue is situated in Upper New York Bay on Liberty Island, south of Ellis Island. Over the years, she has greeted millions of immigrants entering their new home and has been a symbol of hope for a better life.

In the same way, God greets us at times with a spectacular sight in our stress filled present to remind us about hope. It might be a rainbow, a sunset, or a beautiful field of flowers. He may greet us in a song we hear or a movie we see. Many movies have lines that we remember. I remember one line in the movie, “The Shawshank Redemption”, the main character Andy writes to his friend Red, “Hope is a good thing…maybe the best of things.”

How can hope make a difference and why is it such a major part of the Christian life? It’s because it gives patience in time of difficulty. For regardless of circumstance, hope keeps us looking forward to becoming liberated from bondage and set free as God’s children. Hope breeds more hope. It has the power to break old habits and create new ones that are good. Hope is a winner. It builds momentum and lights the fire to success. Then success breeds more success and the link to being a winner is established.

In just a few weeks, the 2012 Olympics begin in London England. The Iconic symbol of London is Tower Bridge which was built because of the increased commercial development in the East End of London which required a new river crossing. Ironically, the construction started the same year the Statue of Liberty was given to the United States.

I love bridges and remember years ago visiting the Golden Gate Bridge; the great landmark of San Francisco. Bridges are sometimes used to explain the love of God for all of us; that Christ is our bridge to help us cross over. He provides the path to follow right now and take us home to victory. Just like the love given to us in Christ as the bridge from here to eternity. Love is the greatest God given gift. Greater than being given the skills to make the Olympics, run a thriving business, or Pastor a growing church.

One time at the church I worship at, we had a guest speaker named David Cook who at the time was a sports Psychologist for the San Antonio Spurs basketball team. He told a story of a hunting buddy whose dog got trapped in an iron trap. The buddy was able to open up the trap a little but it snapped back. His dog was freed but in the process, it broke his hand. David went on to explain that the trap is sometimes like our own lives. We get trapped by things sometimes completely out of our control. Sometimes we fall into some bad predicaments and do the wrong things. But like the man that freed his dog, Jesus can free us from our sins.

After this year’s Summer Olympics, The next host city will be Rio de Janeiro, Brazil. Overlooking the city is the symbol of Brazilian Christianity, the Christ the Redeemer statue. It’s considered the largest Art Deco statue in the world and the 5th largest statue of Jesus in the world. This symbol of faith makes me think this day about how we can add quality to our faith? One idea may be to plant the seeds of God’s principles so that they grow in the fertile garden of our soul; producing food not only for ourselves but also for others. When we see, hear, feel, smell, and speak of our reinvigorated faith; positive results occur. We become a true believer that is clearly revealed in our heart as faith. Bad situations are turned around with a momentum shift. There is given to all of us the power to apply faith and the results are victory and happiness.

God’s power opened the waters of the sea as a path to safety for Moses and His people. His promise for the future is greater and greater with each new invention that He inspires. On this July 4th, take some time to think of ways to plant seeds of faith, hope, and love. Think of ways to produce fruit for yourself and for others. As I wish everyone a good day, I leave you with this amazing video of the Christ the Redeemer statue and a wonderful song: Let the Church Say Amen – Andrae Crouch.

Mark works in the Information Systems Department for an Insurance Company. He volunteers as a member of the media ministry team at his church and runs the 10:50 worship service computer. A few years ago, he started an on-line Bible study guide called “This Day with God Devotional”. He uses this as a tool in his journey through the Bible. We live in a very busy world with busy schedules so this tool has helped him continue with daily Bible reading and study. You’re invited to join him on this journey or check in every so often to read his thoughts.
View all posts by Mark Shields →
This entry was posted in Holidays and tagged American Revolution, Ellis Island, Faith, Golden Gate Bridge, Hope, London, Love, San Francisco, Statue of Liberty, United States, Upper New York Bay. Bookmark the permalink.

1 Response to This July 4th