Ideas for Building a Society with Integrity

The founding father of the United States, George Washington once said these words, “I hope I shall always possess firmness and virtue enough to maintain what I consider the most enviable of all titles, the character of an Honest Man”. Abraham Lincoln, known as “Honest Abe” once worked in a store and walked two miles to return a six-cent mistake on a bill. Isn’t it ironic that the person, who was honest with pennies, now has his picture on them?

In building a nation or a city, integrity is needed as the foundation. In the spring of 1953, the city in which I live went through a disaster. A terrible tornado hit the city and destroyed downtown.  On the 50th anniversary of the event, a person gave a speech about what took place in the days after the tornado. There was only one bank in operation and their records had been damaged. Yet they relied on the integrity of their customers to help keep track of their account balances.

Waco Texas was instrumental in the growth of Texas. Located on the banks of the Brazos river, a suspension bridge was built across the river in the late 1800’s and many say this was either the start of the Chisholm trail or was the main reason this trail grew into the major route Texas ranchers used to drive their cattle to Kansas to be sold. 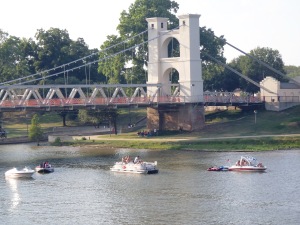 Historic Suspension Bridge over the Brazos river in Waco Texas

Many churches were located in downtown Waco back in those days. One is the church I attend which had to build a new church building and decided to move to a site about three or four miles from the downtown area.

Thinking about how we can build generations for the future with integrity, churches came to mind. To build societies with integrity ingrained in its fiber, what are some ways churches can contribute?

One thing I would like to see is the church using its resources to highlight truth. Our society is bombarded every day with negatives.  From the news, what is reported is almost always negative. A car wreck, crime, wars; this person wronged that person, etc. I guess the theory is that negative news is better for the ratings. Maybe so, I don’t know.

Maybe the experts know what they are talking about but I think in many cases this negative reporting doesn’t boost ratings and is forced upon our society. I would like to see Christians take advantage of the vast untapped potential in churches. I would like to see a team working to develop a positive alternative. Wouldn’t it be amazing to see all churches working together as a team that loves the truth, reports the truth, and helps people see the truth?  A multi-media powerhouse that highlights the good that people demonstrate and highlights the kind acts performed each day. This would cheer up and inspire rather than drag down and inhibit.

Someone awaken this sleeping giant capable of producing more uplifting music than all the music studios put together. Prompting radio DJ’s to play music with values and inspiring listeners to call in and talk about a value the song teaches; a multi-media powerhouse that develops ways to affirm positive values and builds lives that honor these values. Our society needs to find ways to rally churches towards unity. Secularism needs a challenge big time.

There has been some recent success like the “Bible” miniseries on the History Channel and some great books of faith recently that have become movies. There is a lot more work to be done and new ideas to be acted upon.

If you’ve been to a health club or work out facility recently, you will notice that many exercise machines have screens now like the ones in the picture below. The screens show the same old negative, terrible, shows, and news you can watch on TV. Wouldn’t it be great if the screens would show uplifting verses from the Bible, amazing scenes from God’s beautiful world, and inspirational music or poetry? A person could work out and be inspired at the same time.

What if churches got more involved in media presenting the Good News instead of the same ole bad news we get from the “big” secular media? TV screens are now in waiting areas like at doctor and dentist offices, at restaurants, airports, and auto repair shops. Can churches find a way to use these to get the Word out? What thoughts do you have about building integrity into a society and ideas for church growth in the future? Only God knows the limits of the greatest organization ever put together called the church as it leads in building a society with integrity.

There are many ideas one can come up with to help in this process of building a future with integrity. One idea I decided to act upon a few years ago was to develop an on-line devotional or spiritual journey to keep me on track. I invite you to join the journey or check in from time to time for some inspiration. You can like or follow at any of the links below and be notified of new posts.

Mark works in the Information Systems Department for an Insurance Company. He volunteers as a member of the media ministry team at his church and runs the 10:50 worship service computer. A few years ago, he started an on-line Bible study guide called “This Day with God Devotional”. He uses this as a tool in his journey through the Bible. We live in a very busy world with busy schedules so this tool has helped him continue with daily Bible reading and study. You’re invited to join him on this journey or check in every so often to read his thoughts.
View all posts by Mark Shields →
This entry was posted in Integrity and tagged Abraham Lincoln, Bible, Chisholm Trail, Christians, church, Churches, current-events, Exercise, Founding Father, George Washington, God, Good News, History (TV channel), Honesty, Inspiration, Integrity, Kindness, Multi-Media, Music, News, Potential, society, Texas, United States, Unity, Values, Virtue, Waco, Waco Texas. Bookmark the permalink.

2 Responses to Ideas for Building a Society with Integrity